This year, I decided to let others pick my best ten (10) photographs of 2016. Specifically, the people who follow me and/or view my photos on my flickr account based on the number of Favorites or Favs each got.  I will preface this first by noting I did not upload a lot to flickr this year nor have I posted as regularly on this blog. Still, I think I got a very good set of photographs.

10.) Contemporary Christmas (17 Favs). As I mostly upload photos from my Disney trips to flickr, it is not surprising most of the photos are from Walt Disney World as I visited three times in 2016. Starting from the latest trip in December of 2016. On the last evening, my family and I visited the resorts along the monorail line to view each one’s Christmas decorations. At the Contemporary Resort, I found this composition of the large tree outside in front of the resort.

9.) Epcot Monorail (17 Favs). In the Spring, Epcot turns into a colorful landscape of flowers during the annual Flower and Garden Festival. One of the features are the floating flower beds in the ponds the monorails travel over upon transversing the park.

8.) All-Star Goal (18 Favs). The American Hockey League’s All-Star Game for 2016 was played in Syracuse, New York and hosted by the Syracuse Crunch whom I photograph for. I bided and won the contract to photograph the event which featured fan events, AHL Hockey Hall of Fame ceremonies, Skills Competition and the game itself. During the game, I photographed from one of the team’s benches. What an experience to meet all the young talented players and to interact with them. Many have already moved on to the National Hockey League including the goal scorer pictured below.

7.) Summer Flower (19 Favs). Every three years, the sunflower fields surrounding the The Inn Between restaurant near Camillus, New York bloom. I visited the flowers towards the end of their showing. While many flowers were bent over, I found this one standing tall.

6.) On Top of Bald Mountain (12 Favs). In mid-October, my wife and I hiked up to the top of Bald Mountain near Old Forge, New York in the Adirondack Mountains. This was the view from the summit processed in Macphun Aurora HDR software.

5.) Cinderella Castle at Dusk (21 Favs). During my September visit to Walt Disney World, I had set a goal to photograph a sunset in the Magic Kingdom with Cinderella Castle as my foreground subject. The weather was not too cooperative until after the Sun had set. I’ll take it.

4.) Warming Up at Saratoga (24 Favs). For the second summer in a row, I traveled to the world famous Saratoga Race Course in Saratoga Springs, New York to enjoy and photograph the thoroughbred horse races. Before the stormy weather hit, I got in some motion photography with this panning shot of a horse being warmed up ahead of a race.

3.) Galactic Mountain (32 Favs). Disney’s Hollywood Studios now has nightly fireworks shows. With Disney’s Animal Kingdom not too far away, a fellow Disney photographer told me about this angle to capture fireworks with the thrill ride Expedition EVEREST in the foreground. 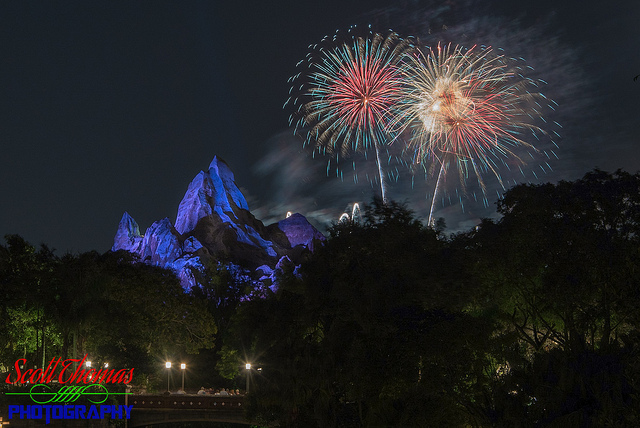 Before I get to the last two photos I want to define what flickr Explore is. A photo is selected for Explore by a complex algorithm calculated into something Flickr calls “interestingness.” Each day, photos are posted to the Explore home page. When a photo gets explored, its views and favorites climb very fast. The Favs for the last two photos were taken back on December 27, 2016 after being Explored.

2.) Christmastime on Main Street USA (Favs 110). After the last stage show in front of Cinderella Castle each day in the Magic Kingdom, you can walk up to the castle’s entrance and see a view right down Main Street USA. Being all decorated for Christmas with a big tree, I could not resist taking this photo even if I didn’t have a tripod with me. Turned out thousands of people could not resist viewing the result.

1.) Soarin’ Over the Matterhorn (198 Favs). Disney updated the attraction called Soarin’ in The Land pavilion of Epcot. The first version featured scenes from California in the United States of America. The new one is more fitting for Walt Disney World as it features scenes from all over the world starting with the Swiss Alps. I used a Fisheye lens to allow me to frame the photo using people on the ride with me.

There you have it. My Best of 2016 as selected by the flickr community.

11 Responses to Best of Views Infinitum 2016