I have mentioned a few times in the past how I became a fan of the National Hockey League (NHL) team, the Montreal Canadiens. They were the team I followed as I grew up playing hockey back in the 1970’s. During that decade, the Habs (as they are known by) won the Stanley Cup championship six times including four straight from 1975 to 1979.

Fast forward to today. I now photograph for the Syracuse Crunch who is the American Hockey League affiliate of the Tampa Bay Lightning. I am fortunate to be allowed to photograph Lightning games and cover former Crunch players when I travel to Florida.  The Lightning team photographer, Scott Audette, has always been very welcoming and I can never thank him enough.

For the game at the Amalie Arena on March 5, 2020, the Lightning’s foe was the before mentioned Montreal Canadiens. This season the Canadiens are not a threat to win the Stanley Cup (especially now) and were out of a playoff position. It did not matter to me, I still got a thrill out of photographing them. The Canadiens have a long history of having elite goaltenders. In net for them that night was Carey Price, a past winner of the Vezina (NHL’s Best Goaltender) and Hart (NHL Most Valuable Player) trophies. 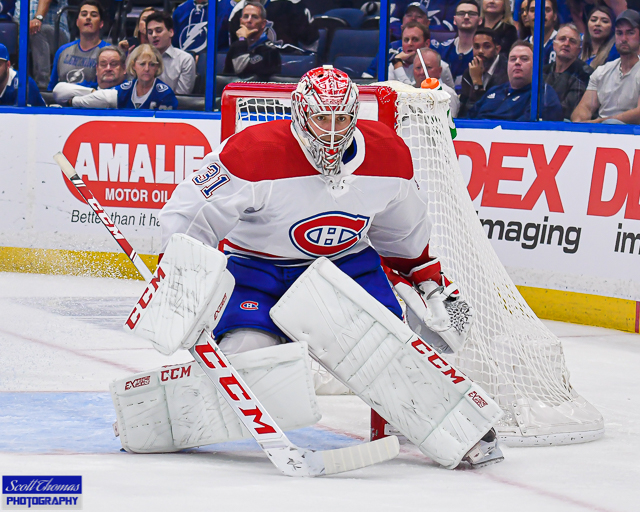 On this night, Carey Price did not have much help with several of the Canadiens starting players out of the game due to injury.  He still gave me many photo opportunities showing what makes him one of the best in the game. Any outstanding goalie I have photographed in the AHL or NHL have a look in their eyes. Carey Price shows it here.

As I write this both the AHL and NHL have suspended their seasons due to the threat of the coronavirus. It may be months before I photograph another ice hockey game though I hold out hope it will be much sooner.