The world was a different place back in February of 1980. The Cold War between the United States and what was then called the Soviet Union was in full swing. An event like the XIII Olympic Winter Games could still be held in a small venue like Lake Placid, New York in the Adirondack Mountains. The Soviet Men’s Ice Hockey team was the best in the world when it came to amateur athletics. They were so good, they could outplay many an NHL team if given the chance.

Last weekend, the Syracuse Crunch celebrated the 40th Anniversary of the game in which the USA Men’s Ice Hockey team defeated the mighty Soviet team in an upset for the ages and was dubbed the Miracle on Ice. In fact, the US victory was voted the greatest sports moment of the 20th century by Sports Illustrated. I got to meet and photograph a member from that team. 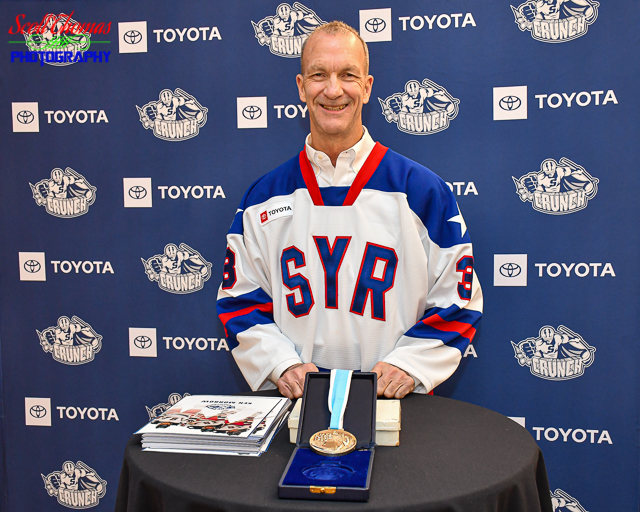 Ken Morrow was a defenseman for the 1980 USA Olympic ice hockey team and brought his gold medal to last Friday’s Syracuse Crunch game.  There he proudly displayed it for the fans to see and be photographed with. He told stories about the game at the event and in an interview with local Sports Reporter, Brent Axe. Worth a listen!

It was a thrill to meet Ken and to photograph him. His comforting personality comes through in the photograph. By the way, after winning the gold medal, he signed with the New York Islanders and won the Stanley Cups in 1980, ’81, ’82 and ’83. Ken’s NHL career lasted 10 years and he is a member of the US Hockey Hall of Fame.